Two of my fave local artists both had work up on (legal) walls this week. BÄST in the opening group show, for the newly launched Allouche Gallery in Soho, & SUCKLORD had his own little solo thing at Extra Butter on Orchard St in the LES.

Both shows worth checking out & both artists are featured in Star Warps! 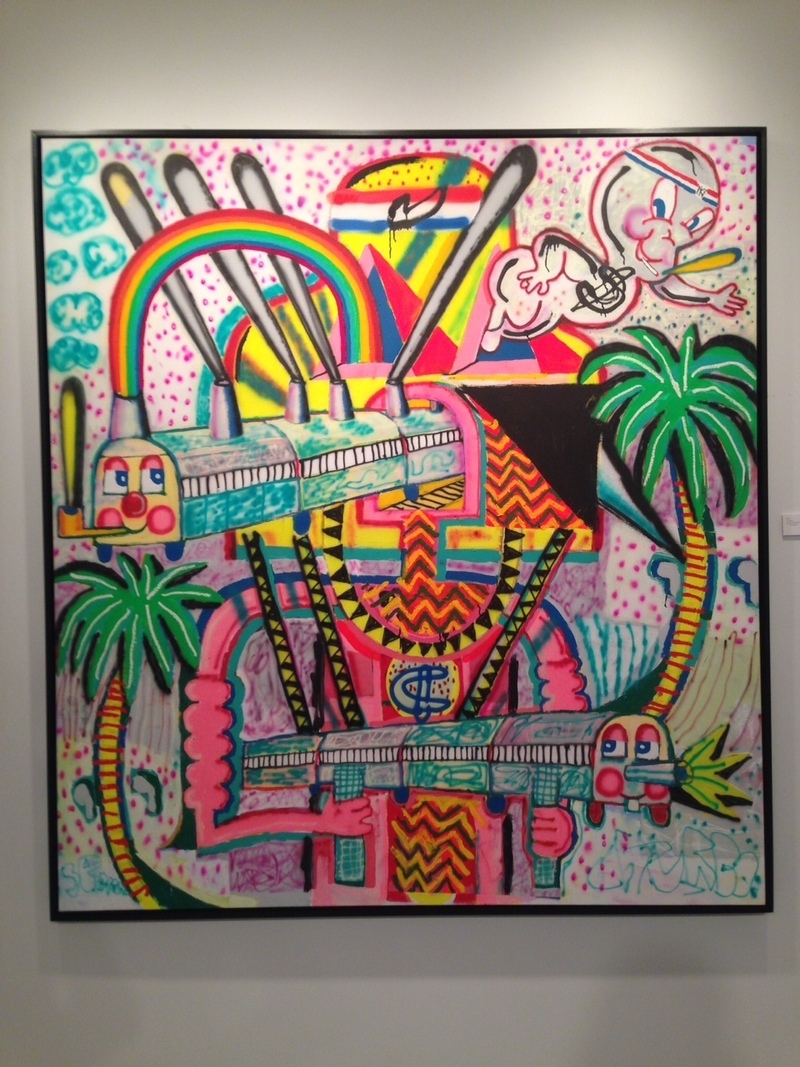 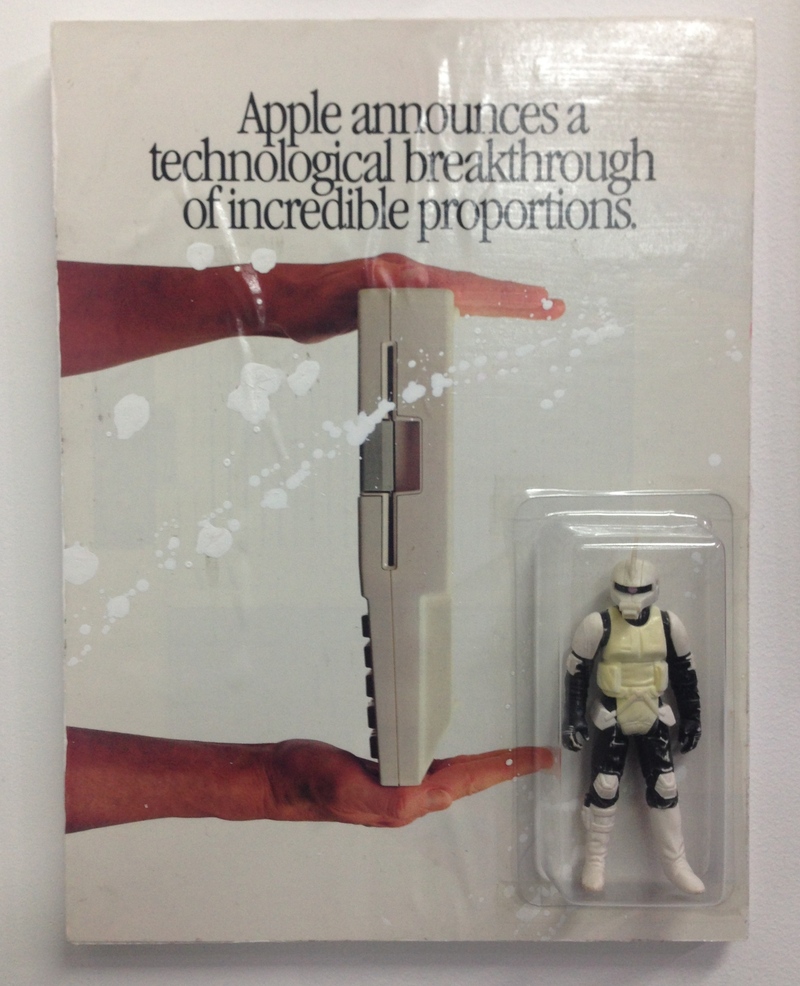 This show has two exclusives! The first comes in the form of a just finished track by producer Norik, and the second is the first BLURRINGradio exclusive mixtape from Spanish techno weirdoes Downlines Sekt. For those who like electronic music on the dark, weird, and experimental side will love this 50 minute eclectic sonic collage. 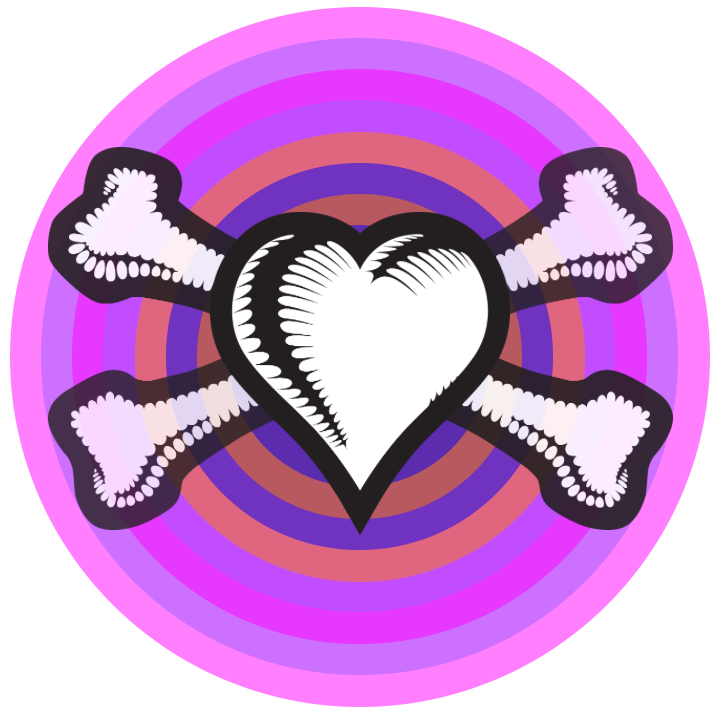 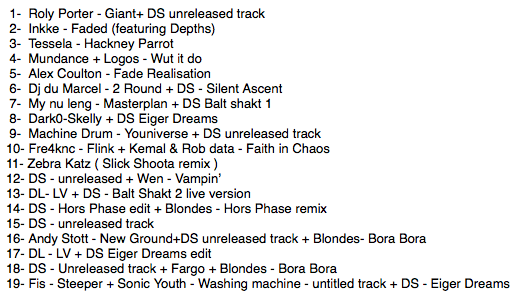 Tim Strazza, who I met when he worked for the Joshua Liner Gallery, curated this small but tight text based show. I'd become friends Greg Lamarche, and Max Rippon (aka SP1 & RIPO), two of the three artists included in this show, while working on my sticker history book. Greg, as SP1 is a Graffiti legend, & back in the day also made wicked postal stickers. RIPO was included in the book for sticking up beautiful painted shards of broken mirror. Def worth checking out the show at No Romance Galleries 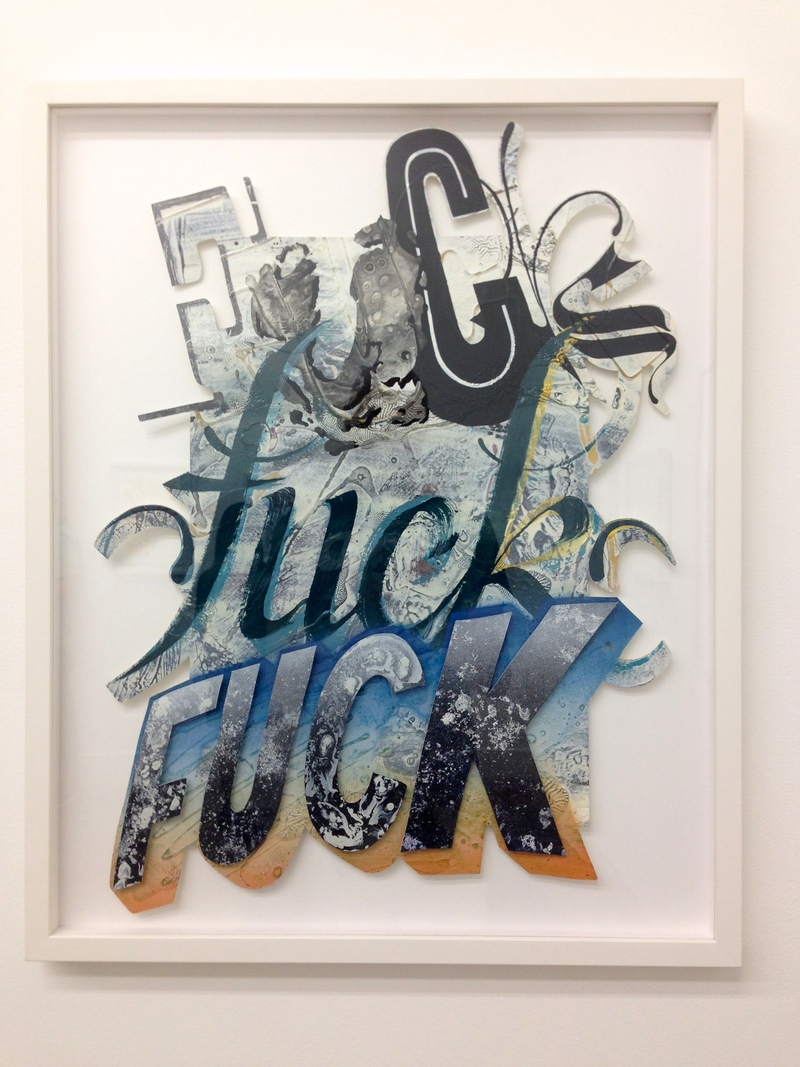 Pulling in favors at the 11th hour, I managed to get Ned & I on the list for this completely sold-out final show!
While the show I saw in Miami back in December was amazing, both visually & sonically, this was a whole other level. Darkside had developed greatly.
The lighting was still super minimal compared to the normal electronic and rock-type shows. In December they had a single white light behind the pair of them, but at this show there were two. They also added a color, plus a bank what seemed like industrial floodlights, that literally made your eyes feel like they were being cooked at times.

It’s so hard to tell how much of their sets are improvised, but musically the songs were seriously embellished & often chunkier/fuller than on the record.
I know it’s never done, but I’d love to see Jaar and Harrington re-record the whole album, including the A1 first single.
As much as I sincerely love Psychic, I feel like it would be better recorded now having toured it for 9 months. And if anyone likes to go against the grain of the music biz, its Nicolas Jaar.

The crowd was a painful mix of the uber-hip (mostly drunk), druggy models & what we were told were all ex-Brown college friends of the pair.
Even with that against us, we had an amazing time.
The Brooklyn Masonic Temple itself added to the wonder of the show, a beautiful example of Greek Revival architecture, built in 1906, & now possibly my favorite venue in NYC.

I’ve never read anything to this effect, but I feel that the whole project could be some sort of tongue-in-cheek tribute to Pink Floyd.
There are times when I swear I hear Dave Gilmore-type guitar licks being played by Harrington…and then, of course, there's the name ;) 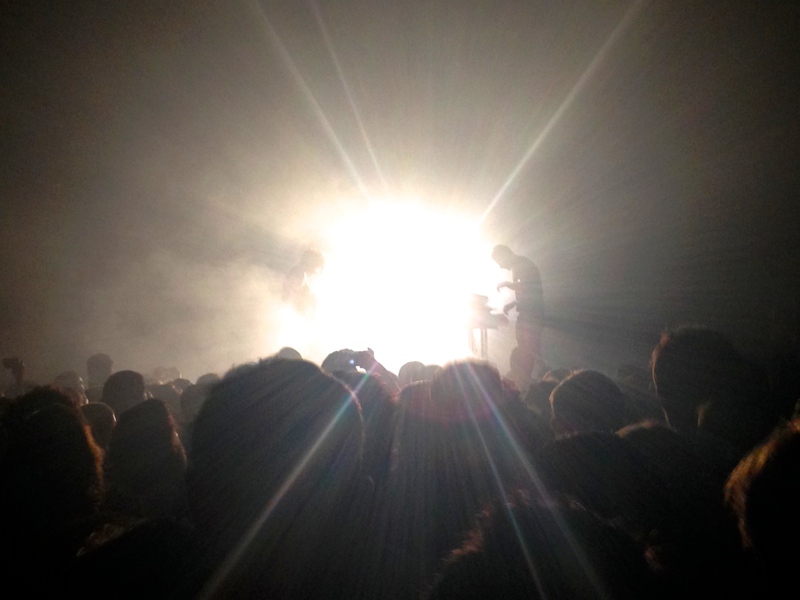 Both of these bands have been on my radar for a few months; both use sampling (ES sampling & looping live sitar), both are referencing influences from the 60’s, both are very young in their development, & both have names that I think are poo, compared to the power of their music.
The first, SOS (formally known by the name I prefer, Shadows On Stars), was on Monday. Since all of New York went back to work & school after the summer, it can’t have been easy to get people to come out.
However, Glasslands was heading towards full for SOS's first NYC performance.
Hard to really put a genre name to SOS, but if pushed, I guess I’d call them a cross between abstract R&B/cyber soul & spaced-out modern rock. They simply call it Alt on their Soundcloud.
While the gorgeous Randa Leigh sings, one can not help but be seduced by her smile, & hips, but for me, the show was most interesting when Brian Vincent & the band actually dug in on the instrumental parts of the tunes.

Elephant Stone at Rock Shop, a venue I hadn't been to before, was equally a hard night to pull people since it fell on 9/11.
The band was cool & tight, playing their own brand of pop-tinged psychedelia, & channeling both the Beatles & the Byrds at times, but with bass & drum rhythms that are danceable.
I’d love to see/hear these guys with a "real" loud system.

Both bands will also benefit when they can afford to add visuals, & in ES's case I missed the diva-type backing vocalist on the record.
Even though they both played in Brooklyn, they could have been in different countries, in different eras.
Monday’s Williamsburg show was a young & cool crowd, making me feel my normal mix of uncomfortable & self-conscious, being the old guy in the room. While Thursday in Park Slope, I actually felt sorry for the band who were looking out on the oldest & uncool gig crowd I've ever seen. If I didn't live in Park Slope, which is a black hole of style, I might have thought this crowd came from some normcore fashion-week event.

SOS & Elephant Stone both have albums out this month .
Coincidentally both are featured on this month’s Blurring Radio mix tape, "Pop Isn’t a Dirty Word." 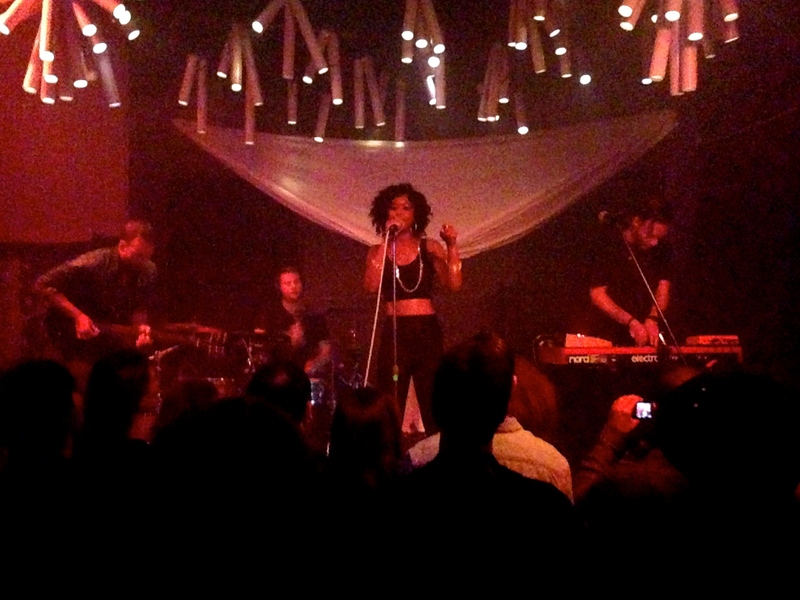 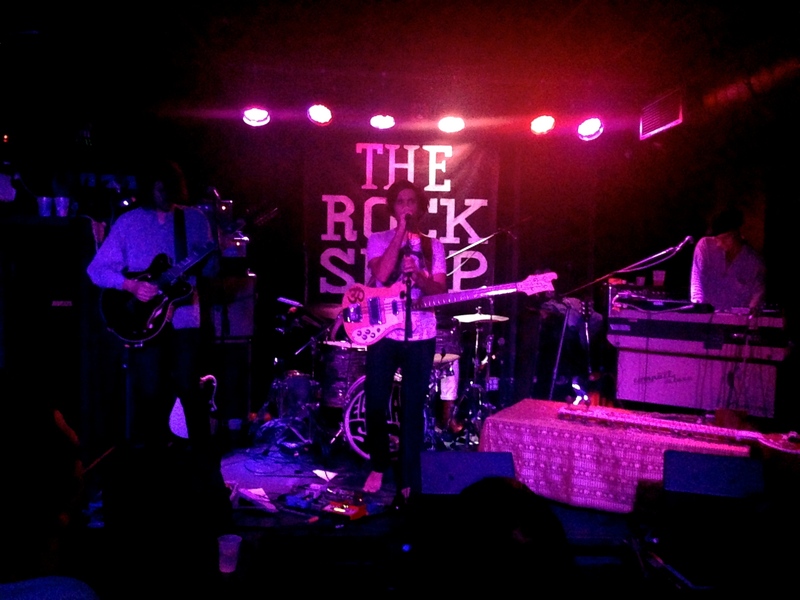 It’s hard to believe, but I’d been trying to see this band for ten full years!

I knew that seeing an arena show was not going to be like seeing them at any of the unusual or tiny venues they played before they became real “rock stars.” So many times in the past I’d either been too late to buy tickets, wasn’t cool enough to know they were playing some invite-only event, or was away (in the case of the recent secret Reflektors shows). So when Barclays dates were announced, I was determined to buy great seats & make sure it was going to finally happen.

The show was great, making incredible use of live video, effects, and live editing! At one point Ned counted 18 people on stage. The band and audience gave their all. In fact, I felt like AF were really pushing themselves to give a fuller than normal arena experience, even to the point of keeping the venue open for an extra hour, turning it into a giant disco/dance party. “This was expensive to do, so enjoy it!” said Will Butler before leaving the stage.

I’m not sure how comfortable they actually are being rock gods. There are clues to their take on “celebrity" in recent videos, and in the show itself, including giant parody heads of themselves. It’s very clear that they made every effort to try and make this arena tour feel as intimate as possible. No easy task.

I know this is a very unpopular view, but for me each release of their four albums got stronger, with James Murphy’s magic touch on their last being by far my favorite. That might simply be due to my love of 303’s, analog synths & dancebeats, and Murphy’s immaculate taste and skills with them. I’d actually had hopes that Murphy was going to make a guest appearance, however it was great fun seeing guest Marky Ramone & the band tear through a couple of Ramones classics. I found this link of the appropriately shambollic covers. 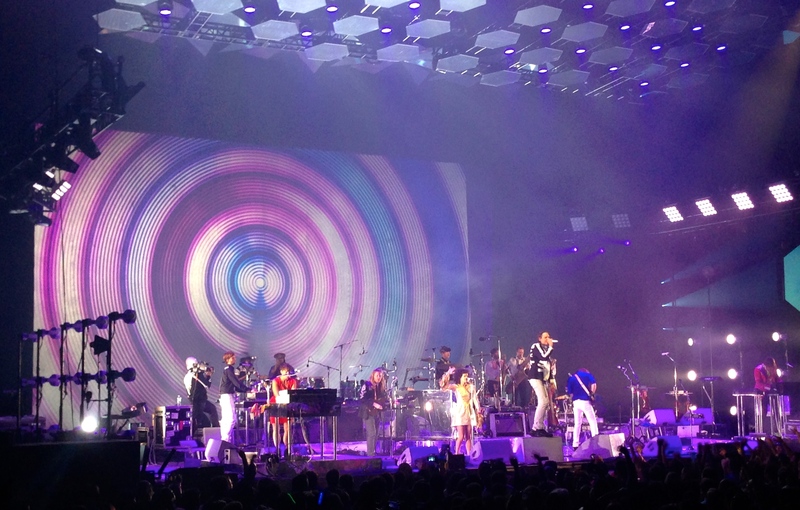 Stephen Romano, one of the galleries in my office building in DUMBO, Brooklyn, has an exhibition that I simply do not have the vocabulary to describe. It is fascinating and bizarre.

The work that caught my eye was the gallery owner’s own cool Kris Kuksi piece. However, It's the book in the images below that so excited me. It’s called the "Hieroglyphica of Merkbeelden der oude volkeren," or the Hieroglyphica or icon images of Ancient Peoples, described by Romano as "a well known emblem book and sourcebook for classical mythology and its iconography.” It is the oldest book I've ever seen and the pages are full of icons, some of which evolved into modern “logos."  It was written and illustrated in 1735 by Romeyn De Hooghe (1645 - 1708). You can actually scroll through the book here. Exhibition is on till the end of August. 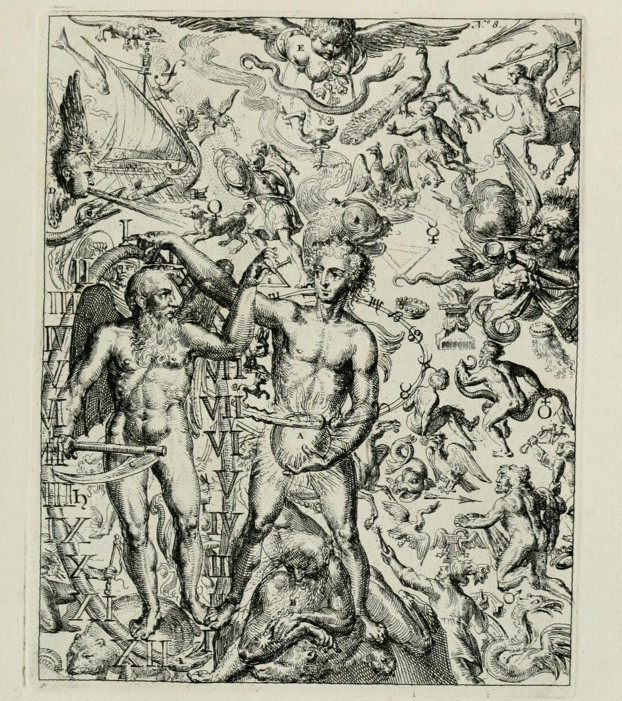 Since my two main passions are music and art, and it makes me very happy when the two beautifully merge together, I’m going to start posting designs for records that I consider worthy.
Below is the CD for FKA twigs' debut album, LP1.
The art is by Jesse Kanda. It was very kindly gifted to me by Ben & Patrick of XL Recordings. I’m not 100% sure if this is the final design, as there’s no text at all, so it might be a mock-up for approval. 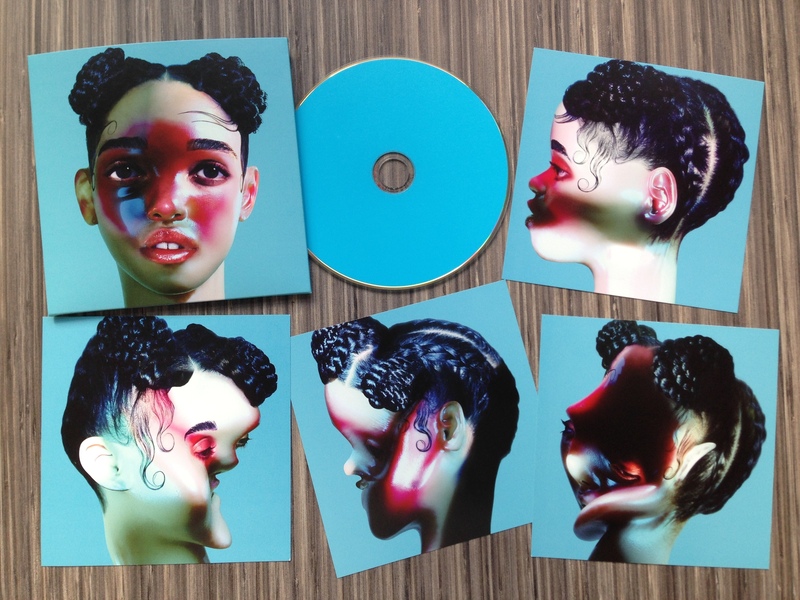 If you’ve yet to discover the fantastical world of FKA twigs, check her videos out..

What really excites me in art is when I see an artist using their medium, whether it be fine painting or graffiti stickers, as a way to deal with personal problems (eg, the canvas or the streets become the place where the artist purges his or her issues).
It’s a little more unusual to find it raw and unhinged in these days of corporate sanitized music, but a few months ago I stumbled, via FaceBook, on a musical artist whose life is literally turning to shit around him. Rock Bottom Boy is dealing with it by raging publicly against those he’s perceived as wronging him. Here’s the YouTube channel dedicated to playback of voice messages, starting with his wife telling him she’s leaving him for his own guitar teacher.

He's recruited family members that have not turned against him (nephews, I think) and formed a naïve, but tight little punk rock outfit.
Every song is like shock/scream therapy. One’s heart can not help but go out to him when he sings about how he’s been fucked over, but at the same time cringe with embarrassment that it’s all so public. One song is about how he “Hasn’t Been Hard” in 15 days.
The live performance is hard to watch, in the same way it's tough to watch an old man crying on a crowded subway train.

John comes from some sort of corporate day job and looks like he came straight from work to the stage. One of the songs is about what he describes as "a secret epidemic: office bullying."
His attire would be uber Normcore if it wasn't the real deal, right down to his clip-on belt phone holder & Bluetooth ear piece.
One aspect I’m not clear on is who & what BIGMUNENTERTAINMENT is, other than the production company behind all his PR & promotion. I wonder/worry that it’s some sort of Svengali in the company that’s exploiting him simply for the sensationalist headlines, and going to push him over the edge. 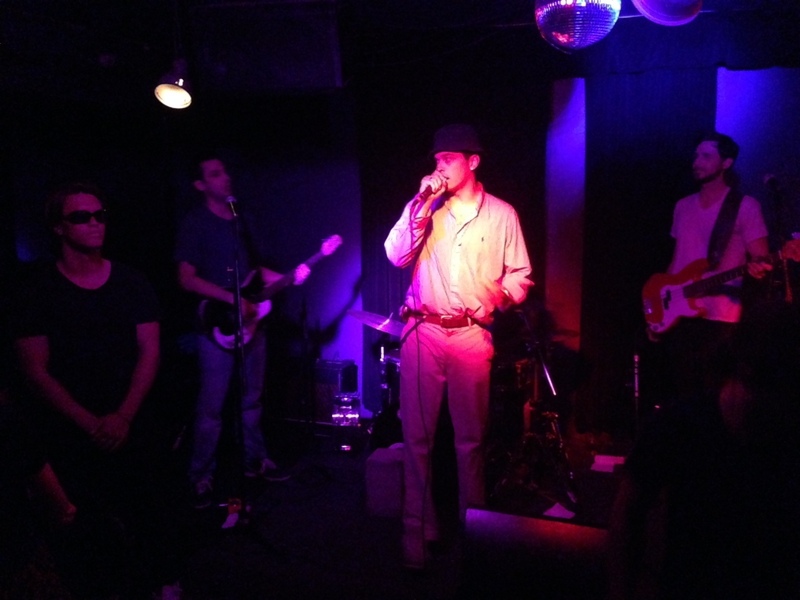