Until about three months ago I don't think I knew anything about War on Drugs other than that they were the Philly band that Kurt Vile had left.
So when my friend Greg Hoffman came into work raving how their new album was the most important American record of recent years, I thought I'd better give it and them a listen.
I am now one of the faithfully devoted!
On Friday, Greg mentioned he had a spare ticket to see the band at the Northside Festival in Brooklyn, and I gratefully jumped at the chance. What a wonderfully strange and extraordinary show; strange simply because I was able to gradually walk to the very front of the massive stage, through the most polite and subdued crowd of any show I’ve ever been to. Also strange because, by all the normal accounts, this is a band that should not be having success in 2014. To me, they feel completely out of time and place, and really don’t fit in this era. Their obvious influences are Springsteen & Tom Petty in the 80’s, when they & producers of big American rock first started using synths. But I also feel Adam Granduciel (who is really War on Drugs) is channeling some true guitar love from the 70’s, such as Dave Gilmore, with more effects pedals than I’ve seen in a couple of decades. He also sings in a very Dylan-esque style. Nonetheless, I love that they do exist and, by all accounts, are finding an appreciative fan-base now. Anyone who loves oceans of reverb, with untold layers of echo & delay, The War on Drugs are for you. 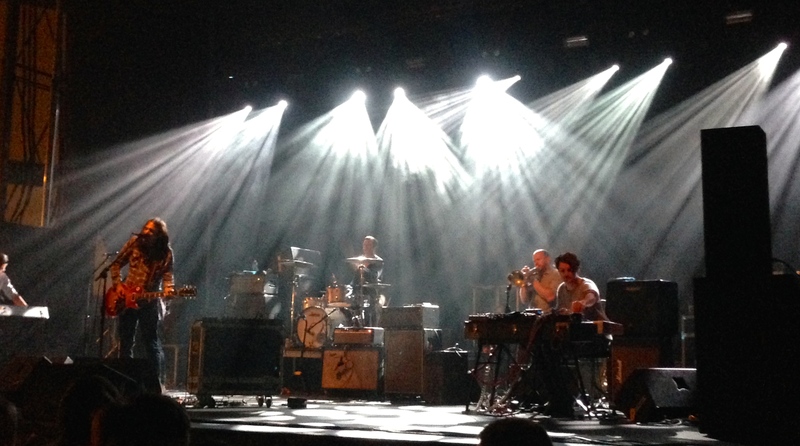 Adam Granduciel taking a Polaroid of the crowd.

Here’s one of my fave tracks if you want a taste..